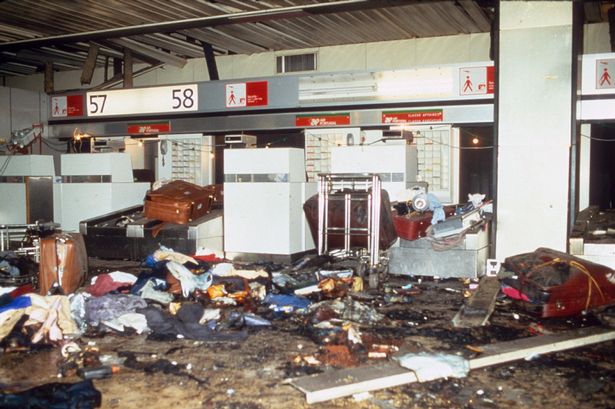 We’re on our way back to New York after a two week family vacation traveling through Europe. My twelve year old self’s goal for this trip was to collect as much Duran Duran memorabilia as I could and the mission was a huge success. After leaving six posters in a hotel in France and not realizing until we were in Switzerland; I was paranoid. I keep peeking in my bag to make sure all the pins and magazines are there. My mom and I sit in the sunlit glass-enclosed terminal and do what we’ve done so well together on this trip: people watch.

“Oh my gosh, look at this one!” my mom says out of the side of her mouth as she jerks her head toward a scrawny teenage boy in a pastel pink sweatsuit crying on his mother’s shoulder. The boy was sickly pale; you could see blue veins in his neck throbbing as he heaved with sobs. The father rubs his back, trying to make himself useful, the mother’s eyes are closed as tears stream down her face.

“I think he’s an French exchange student. Look at all of them over there. They’re probably on our flight.”

A group of French teenagers are clumped together in one area, smoking and laughing using their backpacks as headrests against the wall. Their eyes dart around like they’re looking for victims and sense of dread comes over me as they take notice of Pale Boy and point their cigarettes in his direction. Pale Boy does not look like someone who is going to be well received in an American high school nor does it seem like he is in too good with his travel companions. I feel horrible for him.

My mom pulls out a bunch of tissue and hands me one . I push it away and look at her face, “OMG, Are you actually crying?,” I say, until I feel my eyes fill too. I grab the tissue from my mom’s hand and we laugh as we wipe our eyes.

Pale Boy’s parents leave. He doesn’t join the others on the floor, he just stares ahead. I decide I can’t worry about him anymore; why did he sign up for this trip if it was so traumatic for him?

I pull out my walkman and hit play. I’m listening to the only tape I brought on this trip – The Police’s Synchronicity and I’m throwing it out the minute we hit the States. I open my bag for the twentieth time in five minutes to check on my bounty as the monotonous drone of King of Pain gives way to a loud bang as the floor shakes and glass comes down in sheets all around us. We haven’t moved but are suddenly outside.

My mom and I stand up and start moving with panicked crowds out of the area. There is screaming and shouting of instructions in French; I can’t understand any of it. My mother pulls me along behind her and suddenly reaches back trying to cover my eyes with her hand. I crane my head to see a body, bloody limbs dangling off the stretcher. What is left of his torn clothes are smoldering on his body. “DON’T LOOK! DON’T LOOK!,” my mother screams, crying now. Burning rags are on the ground, blood is splattered all over the pavement, sirens are blaring.

When we finally stop walking, we’re far from the main terminal on a distant tarmac. My brother and Dad are there already. Everyone is trying to communicate but there are language barriers; we’re all frustrated and scared. We have no idea what happened or how long we will be there. I’m looking for Pale Boy.

Six hours later, we finally board the plane to JFK. So tired at this point, I drift in my sleep on to the Rabbi sitting next to me. Ironic if you knew of my fear of people in religious uniforms, otherwise it was just really embarrassing when I raised my drooling chin off his robe and this bearded man smiled at me so lovingly.

At 3 AM last night, I awoke to a notification buzz on my phone. It wakes me, my phone doesn’t often go off at night, I swipe the notification, “Active Shooter on the Strip”. I think about all the FB check-ins I saw over the weekend of people in Las Vegas and quickly check pages of the specific people I remember are there– they’re safe, but threads are played out in real time,  as I watch people are being held in their hotels along the strip communicating with one another. For the rest of the day, I feel sick and try to avoid the news. I’m carrying around that big heavy feeling of ick that I’ve carried more of in the last year than I have cumulatively all my life until now. The first time I felt it was in 1983, I didn’t understand the political reasons behind the bombing at Orly Airport– all I knew was I could have gotten killed and it was terrifying for a twelve year old.

The chances of getting killed in a terrorist or mass shooting event may be slim, but the chances of being caught in one have risen significantly. We’re all becoming a little less phased with each incident and we all seem to be nearing those six degrees of separation for people who have been affected by these acts. Up until September 2001, Orly Airport 1983 was my bomb story. Now it seems everyone has a tragic story to tell and I don’t think we, collectively, are dealing too well right sitting with all of this.

We all need a hug.  oooooooooo

My Tweets
Join 100 other subscribers